The Inspector-General of Police, Usman Baba, has warned police officers, particularly men of the Lagos State Command planning a protest over their unpaid six-month salary arrears to drop their plan as any form of protest would be regarded as mutiny.

There had been reports that men and officers of the Nigeria Police Force, Lagos State Command aggrieved over non-payment of their arrears between January and June 2022, threatened to embark on protest to press down their grievances.

However, reacting to the planned protest by the aggrieved police officers, the IGP in a circular dated January 16, 2023 and sent to all the zonal Commands across the country, said that those who had not been paid their salary arrears were as a result of shortage of fund as the money released by the Nigerian government led by President Muhammadu Buhari was not enough.

The circular, which is now going round on social media platforms, read, “It has come to notice of the Inspector General of Police that some policemen in Lagos State Command are allegedly planning a protest over misinformation on non-payment of the arrears of salary from January to June 2022.

“It should be noted that payment of the arrears from January to June 2022 had been made for all Constables up to unconfirmed inspectors, as the fund released by the federal government could not pay all Personnel.

“As a result, Inspector-General of Police in his magnanimity ordered that payment should start from Constables upward. Be assured that payment for Confirmed Inspectors and Officers Cadre will be effected as soon as fund is released by the federal government.

“Inspector General of Police directs that heads of commands and formations make this a subject of lecture to their men accordingly. Protest in any form will be construed as mutiny.” 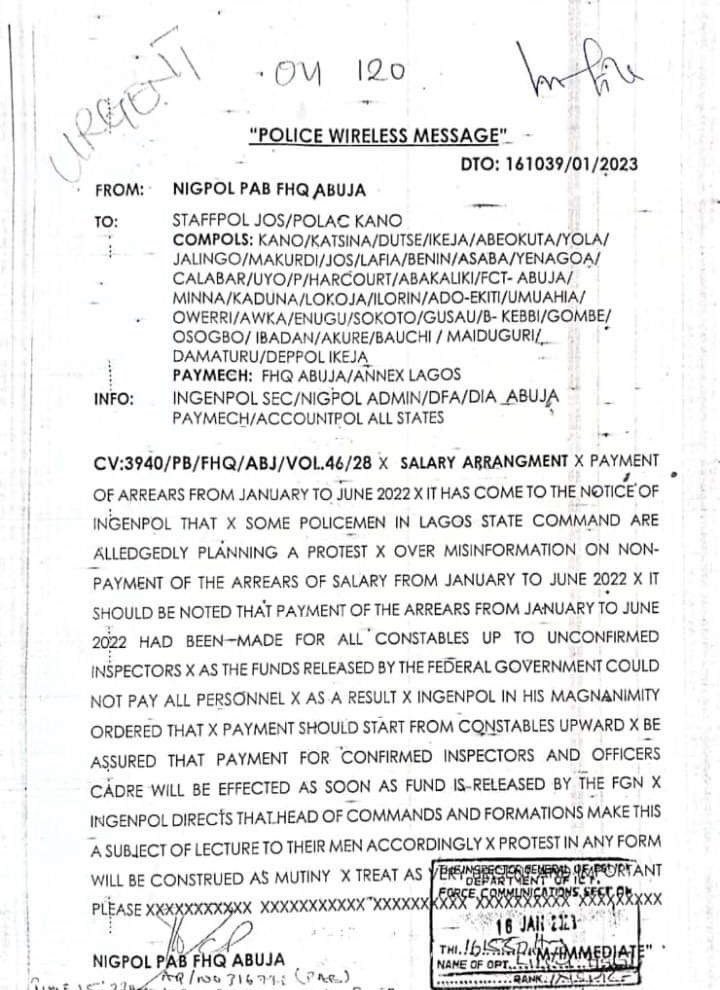 Leave feedback about this Cancel Reply

Let New, And Old Notes To Circulate Together,

THE INTERVIEW with Yolande Makolo, Spoke Person For The Government Of Rwanda.

Sports Journalist, Wole Opatola Speaks on the Impact of Female Athletes in Nigeria’s Impressive Outing at the 2022 Commonwealth Games